Believe it or not, edsi (“ed-see”!) has come leaps and bounds over the last 12 or so months, with a real focus on getting dolled up organizationally before going back out to you guys with our call to action. I feel we’re at that point now, thanks in part to the great collaboration between the team here at Economic Development Solutions International (edsi) and Erin Moraghan at Ponderlust Communications and their partners including Silver Barrel Solutions and Natasha Lee & Co.

edsi was originally formed in 2008 and much infrastructure work was completed early on, long before ever really thinking that edsi would become anything of a marketable entity. We originally partnered with an organization called Missionary Ventures (http://www.mvcanada.org/) to help build this infrastructure, which included early access to some start-up capital, as well as gaining contacts affiliated with this institution on the ground in the various communities we work in like Lima, Peru.

Since then, edsi has grown from its infant stages, and in its adolescence we’ve decided to go out in to the world completely unrelated to any other organization as well being secular in nature. This is an exciting opportunity for us at edsi, but  has meant a turn of focus towards marketing, branding, and going back to market in efforts of raising funds.

One of my greatest friends, Levi Pounds, is not only an invaluable contributor to the Technicolor organization in Toronto, but his ingenious filmography and creative caption of images has earned him an acclaimed profession in the North American film industry. He most recently had his self produced bicycle touring short showcased at a recent film festival in Oregon, in which he was up for an award.

edsi has partnered with Levi in an effort to bring a new style of presenting ways of life in developing areas. In our upcoming project trip to Lima Peru which will span only  six days, a focus for the first few days will be on producing short videos of a few of the businesswomen there to whom edsi has existing loans. We will then be looking to lend out another traunche of seed money – approximately $5,000 USD – to a new group of businesswomen. We want to capture this process via short film, and be able to share this experience with you guys.

So please stay tuned. Pretty soon we’ll be looking into some fun fundraising events and sponsored parties. To stay on track of what’s going on, check us out on twitter @edsi_powered or our facebook page: https://www.facebook.com/pages/Edsi/1434557356783840?ref=tn_tnmn. 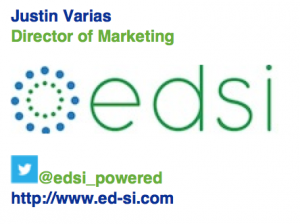 Welcome Back to Lima

Milestone 2015, and an Energized EDSI!

Spring is in the air!!